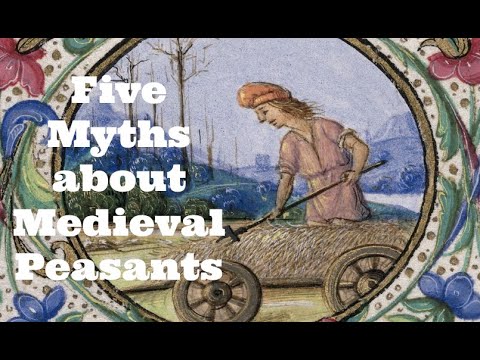 Did medieval peasants travel? Definitely, they took longer vacations than us! After all, they weren't slaves! Unlike us, peasants had long seasons and a hundred holy days a year! That means they would have had more than enough time to travel between their farms! Let's take a closer look at medieval peasants' transportation options and the reasons they traveled.

Back in the Middle Ages, there were few choices in terms of transport. While horses and carts were common, people often walked long distances. From Italy to France, Toledo to Salerno, and Paris to Constantinople, travellers walked an average of 30 miles per day. Traveling by foot was physically difficult for medieval peasants, and it could take eight to ten hours to cover thirty miles. They did not have the luxury of hiking boots or memory foam insoles, nor did they have the luxury of Darn Tough socks to keep their feet warm while walking in the cold.

The main authority in the lives of medieval peasants was the lord. The collective will of the community was crucial to the allocation of land and agricultural arrangements. Since peasants were not able to travel far, their world was small and their sense of community was weak. The battle against nature was fought in many small pockets. In addition to the limited number of modes of transport, medieval peasants did not have the luxury of vehicles or airplanes.

The early Middle Ages saw the decline of overland roads, and most travel took place on foot, by mules, or on horses. Travel by land was slow and laborious, and people were forced to make money by carrying goods. Traveling by water was the most cost-effective way to transport goods, and was also the most convenient and cheapest option for transportation. Unlike carts, boats could carry much heavier loads, so it was often the preferred option.

The Black Death swept through Europe in the mid-14th century, killing between one-third and half of the population. This reversal in the number of people allowed peasants to demand higher wages and better conditions for themselves. In some areas, peasants rose to higher social status. But for others, they became an object of hate, and were punished. There were several reasons why medieval peasants traveled and why they escaped.

A lack of transportation in the Middle Ages forced people to walk. Unless they had a horse, they would have to travel on foot. Even if they had access to a horse or donkey, traveling by land was often difficult, time consuming, and expensive. Adding to the dangers of walking, traveling by land often required lengthy leg work, and a good amount of coinage. It was also possible to be attacked on the road and robbed. This is one of the reasons that many Medieval people chose to travel by water.

Peasants also had the opportunity to become craftspeople. Some worked as blacksmiths, tailors, and carpenters. In addition, trade was a major part of daily life, with goods such as wool, salt, iron, and crops bought and sold. Coastal towns, meanwhile, might have traded with other countries. However, the poor and uneducated tended to be the most vulnerable members of society.

Life in Medieval times was hard. Most people lived a miserable existence - if you survived to the age of fifty, you were considered an old man. They worked until they died, or until they were unable to work any longer. And if you were lucky, you would be able to make a living and re-establish yourself as an independent person. In medieval times, people had to work hard to survive.

In addition to trade, medieval peasants often migrated from one location to another. In addition to moving to better land, they also had the opportunity to escape servile conditions. These new peasants were able to exercise their freedom and independence, as their lives were no longer dictated by their serfs' wills. And this freedom meant they had more personal freedom. This was a necessary and important aspect of medieval life.

The poorest class of medieval society was the peasant, or serf. They were the most vulnerable people in society, and were the least privileged of the three. Their wages were meager, and they were often underpaid. But despite their poverty, they were still able to educate themselves and marry, as they could afford it. The only restriction on peasants was the location of their residence.

Medieval peasants had a variety of methods of transportation. They used wheeled wagons to haul their produce, but these did not have brakes and were not designed for long distances. The most inexpensive transportation option for a poor character was a handcart. Other forms of transportation required harnessing animals to pull them. Handcarts, a variation of the wheelbarrow, were more practical for peasants and were much easier to maintain.

Before the advent of the wheel, people in medieval Europe traveled on foot, mules, and horses. Although land travel was the most common means of transportation, medieval travelers also made use of boats powered by wind or water. While human feet were the most efficient and cheapest option for travel, horses and carts also were used in the process. While land travel was a reliable method, it was still slow and required a great deal of leg work.

While horseback was still a popular form of transportation, horses were slow and uncomfortable. Medieval horses could only go about twenty miles per day. Nevertheless, horseback was the primary mode of transportation for medieval people, and wasn't limited to the upper class. Anyone who could afford a horse used it as a means of transportation. As a result, long lines of packhorses traveled across Britain to deliver goods.

Outside of Scandinavia, medieval peasants relied on horse-dragged sleighs and boots to get around. However, during the Little Ice Age, these methods were impractical, and isolated hamlets often paid the price for them. Peasants were required to buy a plot of land from a lord and paid dues. These dues were made in the form of agricultural produce.

In addition to horse-drawn carriages, medieval peasants used a variety of forms of transportation. Roads were generally poor and difficult to negotiate. The roads were often impassible, so they used wooden planks and gravel strewn about the road. Even then, horses were not safe for transportation, as they could be thrown off. Also, the road surface was poor, so people tended to fall off their horses and get injured or killed.

In the Middle Ages, improvements in transportation made it possible to trade with distant neighbors. Increasing trade between towns allowed for merchants to become increasingly important and specialized in their own crops. They also relied on one another for supplies, resulting in fewer class distinctions and a higher level of prosperity. While improvements in transportation made life easier, the improved roads also increased travel and brought the Bubonic plague to Europe.

› Letter of enrollment for school travel

› Korean bbq restaurant near me travel

› I owe my soul to the company travel

› What armor does master chief wear in halo ce travel